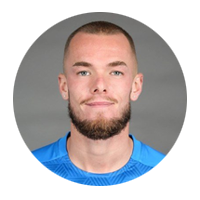 Joe is a former academy scholar, and whilst developing his skills as a football player he successfully completed an NVQ Level 2 Activity Leadership and BTEC Level 3 Sport qualification. During a three-year spell on our programme Joe was part of two championship winning teams, and made his senior debut for Chelmsford City in the National League South at the age of sixteen, and he scored his first goal during their 6–0 home victory over Farnborough in the 2012–13 campaign. The following season Joe also scored the goal to save Chelmsford City from relegation in a 1–0 win over Gosport Borough. In his final campaign at Chelmsford City, Joe netted eleven times, including six goals during their impressive FA Cup run, in which they reached the fourth qualifying round before being knocked out by Barnet.

Following trials with both West Ham United and Brighton & Hove Albion in the summer of 2015, Brighton & Hove Albion signed Joe on a professional contract on 3 June 2015. Joe was sent out on a month loan to National League side Lincoln City in January 2017, and made his debut during Lincoln's 3-1 win over Gateshead in the FA Trophy second round. In the following round, Joe netted twice during Lincoln's 3–1 away victory against Welling United. Six days later, Joe's loan spell was extended for a further two months following some impressive form, especially in their FA Trophy campaign. The highlight of Joe's spell at Lincoln was playing against Arsenal in the FA Cup Quarter Final on 11 March 2017 where they went out against the Premier League outfit after losing 5-0.

On 21 June 2017, Joe signed for National League club Woking on a two-year deal following his release from Brighton & Hove Albion, and on the opening day of the 2017–18 campaign, Joe netted in Woking's 2–1 home victory over Gateshead, sealing the winner in the 44th minute. Joe went onto net five more times during their league campaign, including goals against Torquay United, Macclesfield Town, Maidstone United, AFC Fylde and Dover Athletic. Following this impressive form, Joe received his first call-up to the England C squad, in which he featured for 45 minutes during their 4–0 International Challenge Trophy final defeat against Slovakia U23s. During Woking's impressive FA Cup run, Joe netted the Cards' equaliser in their second round tie against League One side Peterborough United.

On 10 January 2018, Joe joined Peterborough United following his impressive performances against them, on a two-and-a-half-year deal for an undisclosed fee. Three days later, Joe made his Football League debut, in a 0–0 draw with Wigan Athletic. Joe has now established himself as a regular first team starter and fans favourite, and after an excellent 2020/21 campaign Joe played a fundamental part in Peterborough’s promotion to the Championship. Joe was also named in the League One team of the season.

Unfortunately, the club found the 2021/22 season tough going and were relegated back down to Division One, but Joe remains a regular first team starter, and he has now surpassed 150 appearances for the club.

Jack is a former academy scholar, and whilst developing his skills as a football player he successfully completed an NVQ Level 2 Activity Leadership. Jack was part of two championship winning teams, and his talent saw him break into senior football with Isthmian North Division side Heybridge Swifts where he scored 20 goals in his first season.

Jack then joined Tilbury before promotion chasing Thurrock came in for the striker and he scored 15 goals to help them win promotion to the Isthmian Premier Division.

Jack attracted interest from many clubs throughout the football pyramid thanks to his ever improving performances, and he started the 2017/18 campaign at Pheonix Sports where once again he became a regular goal scorer. He then joined Greenwich Borough in the autumn of that season where he never looked back, finding the back of the net almost every game. By the end of the season Jack scored 37 goals, was involved in 10 assists, and finished as the top scorer in the Isthmian South Division. This kind of form was rewarded with his first professional contract at Barnet who finally secured his signature for the start of the 2018/19 campaign.

Since then Jack had a loan spell at Dorking Wanderers, before signing for National League South team Dartford. Ahead of the 2021/22 season Jack signed for Maidstone United who play in the same league.

The 2021/22 campaign saw Jack make 27 appearances, scoring 18 goals in what turned out to be a championship winning season for the club, and they now play in the National League. 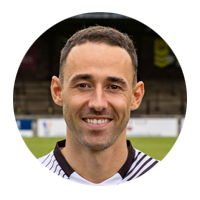 Sam is a former academy scholar, and whilst developing his skills as a football player he successfully completed an NVQ Level 2 Activity Leadership. Sam was part of two championship winning teams, and on leaving our programme Sam had spells at Isthmian North Division sides Maldon & Tiptree and Heybridge Swifts, before moving to Essex Senior League side Stansted where he scored 32 goals in 68 appearances.

In 2017 Sam joined Witham Town in the Isthmian North Division, and after continued success Sam made two appearances for the England C team. His talent led to him signing for East Thurrock of the National League South in 2019, and towards the end of the season Sam had a brief spell at fellow league side Concord Rangers before moving on to Hemel Hempstead Town where he scored 10 goals in 29 league appearances.

Following the expiry of his contract Sam joined League Two side Crawley Town in the summer of 2020 on a two-year contract, and scored on his debut versus Millwall in the EFL Cup on the 5 September.

On 5 March 2021, Sam joined Woking on loan until the end of the season, and once again scored on his debut, heading in the opening goal of a 3–0 win over King’s Lynn Town.

On 29 January 2022, Sam signed an 18-month contract for Scottish Championship club Ayr United on a free transfer. He made his debut as a substitute in a 1–1 draw with Hamilton Academical, scoring the equaliser 7 minutes after coming on. 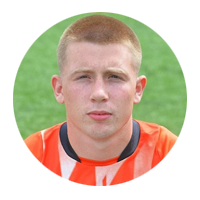 Tobias is a former academy scholar, and whilst developing his football skills he also successfully completed the Btec Level 3 in Sport & Exercise Science’. Tobias was selected for the English Colleges' League squad, and on leaving our programme he joined senior side Bowers & Pitsea FC. After a very successful debut season Tobias signed a professional contract with Football League Championship side Luton Town.